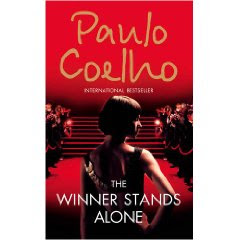 Just read a great and inspiring quote from Paulo Coelho's new book, "The Winner Stands Alone". Check out the full book which he is posting chapter by chapter in his blog at http://paulocoelhoblog.com/

‘Do you know anything about frogs?’

‘Yes, various biological studies have shown that if a frog is placed in a container along with water from its own pond, it will remain there, utterly still, while the water is slowly heated up. The frog doesn’t react to the gradual increase in temperature, to the changes in its environment, and when the water reaches boiling point, the frog dies, fat and happy.

‘On the other hand, if a frog is thrown into a container full of already boiling water, it will jump straight out again, scalded, but alive!’

Olivia doesn’t quite see what this has to do with the destruction of the world. Igor goes on:

‘I was like that boiled frog. I didn’t notice the changes. I thought everything was fine, that the bad things would just go away, that it was just a matter of time. I was ready to die because I lost the most important thing in my life but, instead of reacting, I sat there bobbing apathetically about in water that was getting hotter by the minute.’
Olivia plucks up the courage to ask:

‘What did you lose?’

‘The truth is I didn’t lose anything. Life sometimes separates people so that they can realise how much they mean to each other. For example, last night, I saw my wife with another man. I know she wants to come back to me, that she still loves me, but she’s not brave enough to take the first step. Some boiled frogs still think it’s obedience that counts, not ability: those who can, lead, and those with any sense, obey. So where’s the truth in all this? It’s better to emerge from a situation slightly scalded, but alive and ready to act.'