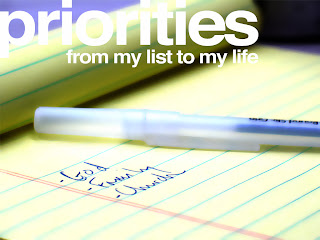 Plan is to judge everything I choose to do against these three priorities and anything that doesn't fall into one of them will be considered "Just for Amusement". And there's always time for amusement... as long as the work get's done.
Written by Dan at 10:39 AM

If you're interested in really changing things so these become your priority, read the book Switch: How to Change Things When Change is Hard.

You want to change? Stop trying to buy your friends or trying to look like them, otherwise you're going to end up still renting an apartment with roomates when you're thirty. There's a time in everyones life when they have to outgrow their buddies and pursue an adults life. And above all stop using those limo's unless your friends are chipping in equally for their use, otherwise the only person being taken for a ride is YOU.

Interesting... You seem to know me but not know me that well. About 3 months ago, your advice would have been almost spot on but more recently, it doesn't apply. I will say though that I've never bought friends... just attempted to make sure everyone had a good time. Also I'd add that I chose to live with roommates this time... previously, I lived alone. Either way, I agree with a lot of what you're saying and will take it into consideration. Thanks.

I like that phrase "just attempted to make sure everyone had a good time" if you're being paid to do this then you are doing your job which is ok, if YOU are PAYING to "make sure everyone has a good time" there is a job being done and it's on YOU. Laymens terms you're being used, you'll learn the hard way someday that friendships of unequal "financial or social status" never last, you seem pretty smart hang out with other "financially secure" people you'll go a lot farther in all aspects of your life. good luck. p.s. the stuff in quotes are your words.